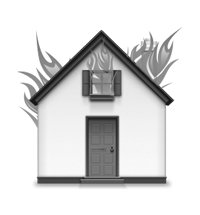 A fire insurance policy covers the financial loss which insured may suffer due to destruction of or damage to property or goods, caused by fire, during a specified period and up to agreed amount.

The policy specifies the maximum amount, which the insured can claim in case of loss. This amount is not, however, the measure of the loss. The loss can be ascertained only after the fire has occurred. The insurer is liable to make good the actual amount of loss not exceeding the maximum amount fixed under the policy.

Complete your questionnaire to start your quote to see how companies compete for your business. You could save up to 25% on your Fire Insurance Policy just by comparing and selecting the right policy.

A claim for loss by fire must satisfy the following conditions